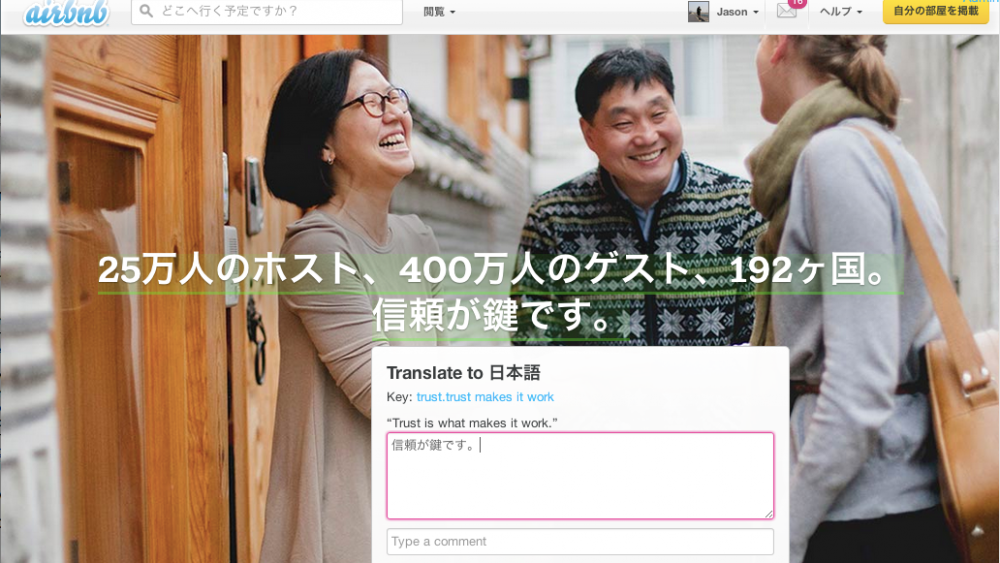 How Airbnb aced the ‘Global’ Challenge. 11 Strategies that will leave you awed

In last few years, Airbnb has changed the way people travel around the world. Airbnb currently operates in more than 190 countries giving freedom to travelers to look for their stay in other than hotels or other such accommodations and also explore a city like a local. Let us examine how Airbnb is breaking new frontiers by successfully implementing their glocal and Multilingual customer support challenge.

Branching out in new languages

The image which a company like Airbnb wants to portray is that of a global citizen. Hence, it was natural for it to offer its services in new languages and also the need for Multilingual customer support solutions. The inherent philosophy of company was to be global and local at the same time. To incorporate localization, it was imperative for it to offer translation.

Airbnb presently prides itself for offering its services in 26 different languages, enabling it to reach every nook and corner of the world. It’s an onerous task to manage a website in 26 different languages, and while a lot of Multilingual call center solutions offer this service, let’s examine how Airbnb responded to new localization challenges.

One of the most important challenges for Airbnb was to translate its content in multiple languages in a short span of time. It successfully used crowdsourcing, backed up through its in-house translators and Outsourced Multilingual call center solutions.
The company also used its community of hosts and guests worldwide to assist with both translation and proofreading. It was a great idea as it is comparatively cheaper, faster and is also helpful in infusing a sense of community. For instance, when Airbnb needed to localize its website in Japanese fast, it turned to its community of Airbnb hosts for Japanese translation and Japanese call center support. Nothing can beat the effect when community members who have actually travelled or hosted on Airbnb decide to provide the voice that introduces Airbnb to Japan. Airbnb community members possess the first-hand information about its services and at the same time quite enthused about making Airbnb accessible in their respective language. A lot of  Japanese call center outsourcers also offer Japanese translation services along with Japanese customer support solutions.

The company on its part treats its hosts and guests at par with professional translators and outsourced multilingual call center and pays them accordingly.

However, this approach is riddled with issues of accuracy and consistency. Airbnb addressed this with professional translators, localization experts and outsourced multilingual call center who are all responsible for checking translations for mistakes and their consistency with the brand’s voice.

Airbnb knew that translations will play an important role in developing business in new areas and accordingly came out with a highly advanced translation management tool (TMS). It has inbuilt feature for selecting new phrases from the website and sending it to the translators for translations which go live on the site almost immediately. This is very useful for adding new languages and also updating their existing content.

It really doesn’t matter if a traveller is from France, Germany or China, they all think alike. There is a common thread that connects all these people when it comes to their expectations while travelling. They want to meet new people; they want to make a binding, they want to taste the local food; they want to explore interesting sites. Even their attitude about language is no different and they also realise that they won’t have the luxury of using their own language all the time but there are situations wherein they do require Multilingual Customer support and that requirement can be catered to hiring outsourced Multilingual call center solutions.

Multilingual world is a reality

Airbnb successfully ran a campaign called “one less strange” to highlight the fact that when two people from different cultures come and stay together, they are no more strangers. This was a wonderful idea and expectedly it found a lot of takers among travellers. However, the challenging part was to translate it into different languages as the slogan had different connotations in other languages.
For instance, in German, the word “stranger” is similar to the word “foreigner”; and with “one less foreigner” the true meaning would have been lost. This is the same challenge when businesses use machine translation to provide German customer support instead of having a  German call  centre staffed with native German speakers. Therefore, to overcome this problem, Airbnb resorted to transcreation for each local market and thus were able to convey the real meaning and intent of their message worldwide.

When it comes to translating content into another language, one needs to be selective as it is not easy to translate everything into all languages. Here, Airbnb smartly used machine learning to decide which languages should be prioritized in listings. This was done after finding out the ethnicity of travellers who booked in a specific location.

For example, if a host publishes a list in Manchester, UK, and if a majority of travellers opting for that destination are from France, Russia and Brazil, then the listing ought to be in French, Russian, and Portuguese. The same logic is used to decide what languages should be promised while planning multilingual call center and multilingual customer support for them.

Machine Translation is NOT dependable

If you are contemplating multilingual customer support for your business,these are a few things you must keep in mind before you set up your multilingual call centre.

Airbnb went way beyond just advertising in the local language and using a multilingual call center to establish itself in a new market. For a global startup like Airbnb, word of mouth publicity was crucial. It’s a common knowledge that one satisfied customer brings more such customers along with him. Airbnb came out with a referral scheme for travellers under which they were supposed to promote Airbnb and company on its part offered travel credits to both referrer and the recipient.

Airbnb tailored this referral system to suit cultural habits in some overseas markets. The company especially launched a scheme for travellers from Asia who generally browse through their mobiles. Airbnb ensured that its referral program is available for mobile users by integrating with popular messaging apps like Whatsapp, WeChat, and Weibo. This is apart from providing multilingual customer support such as Chinese call center support  and Japanese call center support in these markets. They also have multilingual social media to support their marketing efforts.

Similarly, they used user data to identify challenges that are unique to the local market users and created highly targeted campaigns to address them. As a part of this, based on the nature of most frequently asked queries in the region, they created a video in East Asia showing a young woman planning a trip and in the process dealing with issues like how to make the booking, how to contact hosts etc. Making sure they used localized voiceovers, their marketing campaigns are distinctive, authentic, and have a local feel. They create the same experience through multilingual call center solutions for their customers. Imagine the comfort when a Japanese customer is able to contact a Japanese call center for help and Spanish customer is able to speak with someone in a Spanish Call Centre.

While expanding its business in some countries, Airbnb realised the fact that relying only on the online approach could be detrimental to its business interests as there was a wide section of hosts who preferred personal face-to-face interaction. Their facebook campaign to woo the new hosts in France didn’t give it the desired results.

This made the company to change its strategy and instead of doing an online campaign, it decided to send people in batches of two or three who met prospective hosts and spent time in explaining the features of their products. It also participated in local cultural events, setting up booths and posting flyers in order to reach new hosts. They made sure they had French call center support in place for both hosts and guests to answer any questions they may have promptly. Some of their
French call center executivesare in-house while others work as their extended team in an outsourced multilingual call centre. Such innovative methods paid rich dividends to the company as the results were phenomenal.

The core strategic insight of 3 H

With Airbnb, you don’t feel like a tourist. You feel as if you live there. There are 3 H “Homes, hoods, and hosts” that define the core aspect of Airbnb experience which makes guests feel like at home. This 3 H differed from one market to another helping company to adapt and adjust as per need of a particular market.

For example, guests appreciated the host interaction in the US while French people, in general, welcomed unique experiences without undermining the comfort of familiarity. In China, having a local host was a new experience for guests, so the focus was on the messaging to gradually introduce them to this new idea without compromising their mental peace. In South Korea, safety and security were the major issues; hence making them at ease with “homes and hoods” was a big challenge.

One of the unique features of Airbnb multilingual customer support is that it formed an alliance with homeowners who could speak multiple languages. The hosts apart from fulfilling their responsibilities also act as support executives and talk with their customers in their own language to help them.

Airbnb came with a game-changer slogan “Don’t go there, live there”. It instantly found a connection with adventurous folks the world over and made them quit the regular tour groups and experience the world like locals that were offered by Airbnb. The company came out with catchy slogans like “Don’t go to Paris,” “Don’t go to LA,” and “Don’t go to Tokyo”.

It was altogether a novel concept where a travel brand telling people not to travel – at least, not like the conventional way. This was a unique campaign exhorting people to “live there” – to stay in a home away from a home exploring local sightseeing, trying new cuisines, and interacting with the host who is more like a friend.

Airbnb also used the hashtag #OneLessStranger that became a rage on Twitter and Instagram. Those who experienced their services share their own stories of bonding with people from all over the world. Airbnb’s multilingual customer support and marketing strategy has been an absolute winner connecting people and also encouraging them to share their own stories. You cannot describe the feelings in words after getting welcomed in a faraway country by your host and that too in your own language. You feel like as if you are at home.