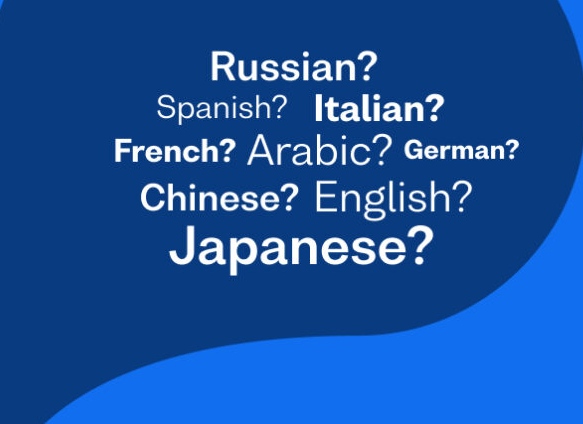 Which languages will navigate the future of call center outsourcing services?

Bill Gates, the richest man in the world once admitted during an interview that his biggest regret in life was that he could speak only one language. That says a lot about how the world in the last few years has moved away from English to other languages. As many as 64% of top executives of mega-companies acknowledged the fact that their biggest obstacle to expanding globally was the language barrier.

Despite the predominance of English in the United States, many people speak languages other than English, and there is growing interest in how well this group can participate in everyday life and interact with the English-speaking majority.

Non-English-speaking customers that constitute around 54.1% are severely handicapped by the lack of support in their native language and end up getting support in English, a language they aren’t familiar with. In most of cases, the call center agent either tries to manage help through a colleague or utilizes free online translation services.

English has been the most preferred language in the business world for a very long time and it has undeniably been the most used language in the world. However, it is fast reaching a saturation point and it will not preside for a long time in the future. A significant shift is palpable from English to other languages that are finding more favor in the business world. This is owing to many factors such as population, migration, economic growth, and Internet penetration. The rate of economic growth and Internet penetration are more concentrated in emerging economies such as China and Brazil that explain why languages such as Chinese call center services and Portuguese call center services are rising up in demand.

The losses on account of inability to do business with the consumers of fellow European Union countries is a colossus as only 16% of retailers are doing online business with other EU countries and as few as 15% of European consumers buy online from other EU countries. In the UK alone, the lack of skill to speak non-English languages costs their economy an astronomical $62 billion that is 3.5% of their total GDP.

In the last 30 years, globalization has shrunk the world and now more and more people are communicating and cooperating with diverse businesses.

To provide multilingual customer support services to international customers can be challenging since there are more than 7,000 languages worldwide and it’s not easy to find out the most important languages. Let us try to find out which languages will rule the roost in the coming decade and thereafter.

According to the latest CSA report, the top 14 online languages that will dominate the world in the near future are:

English
English, the native language of around 380 million people in the world is the most widely spoken language. The use of this language is greater than ever before and according to the British Council, around 1.75 billion people around the globe speak this language, which is almost a quarter of the world’s population. English is also one of the most influential and preferred languages of those who are trying to learn a language other than their own and hence, it is imperative for all businesses to offer English call center services.
It is the official language of one of the most developed countries like the US, UK, and Canada and that gives an English lot of leverage. But now it has reached a stage where further expansion seems difficult since other languages are fast replacing English as the most preferred language for the e-commerce business and call center outsourcing services.

Chinese
The importance of Chinese call center services, both in Mandarin and Cantonese, could be estimated by the fact that apart from being the native language of 980 million people, there are more than 1000 million people worldwide who understand this language. Though most Chinese speakers happen to be in China, its projection of becoming the leading economy by 2050 makes Chinese one of the most important languages of the world.
Chinese is one of the fastest-growing global languages that have a share of 13% of the total Internet GDP. This share is slated to improve further to 17% at the expense of English.

Arabic
Arabic is the official language of a league that includes 22 countries. The language also religiously binds most of the population of this region, which has a combined GDP of $ US 600 billion. The Middle East is one of the most preferred markets for most businesses given their affluent customers. Arab consumers show a clear predilection to talk in Arabic and hence, call center outsourcing companies have seen an unprecedented demand for native Arabic call center services.

Hindi and Bengali
Along with Chinese other Asian languages like Hindi, Bengali and Urdu are also becoming popular because these aren’t only spoken In India but also in Pakistan and Bangladesh. Hindi is the official language of India, which is the seventh-largest economy in the world.
In all, more than 650 million people either speak Hindi as their first language or use it frequently. Similarly, Bengali is the main language of Bangladesh and the state of West Bengal in India. Overall, there are 265 million people who speak and use it as the first or the second language.

Spanish
Spanish happens to be the main language in more than 20 countries, most of which are from Latin America. At the same time, Spanish is also one of the widely spoken languages of the US, a country having a 30% Hispanic population that by the end of this year is likely to become 60 million in numbers. Besides the US, some of the fastest economies of South America are namely Argentina, Cuba, Mexico, and Paraguay. Spanish call center services have always been in demand but it is expected to increase in the near future.

French
French, traditionally the language of love is one of the most popular languages. There are 75 million native speakers in France, but the language transcends much beyond the country of its origin where another 370 million people speak this beautiful language. France, the sixth-largest economy and its capital Paris being the cultural hotspot of the world gives a lot of momentum to the French language. French is also popular in the former French colonies in Africa like Cameron, Chad, Congo, Burundi, etc. French consumers take pride in their language and prefer talking to a French call center agent when they call customer service of a business.

German
German isn’t only the official language of Germany but is one of the most important languages in Europe. Other than Germany, it is widely spoken in Switzerland, Denmark, Austria, and Belgium. German sounds rather serious and imposing, thus truly representing the German psyche of dominating the world trade. Since the use of English in Germany is limited, if you want to do business in Germany, German call center services are indispensable.

Russian
Russia has the largest base of Internet users in the whole of Europe and that makes it the haven for the e-commerce and advertisement business. As per the CSA’s survey almost, 80% of Russian-speaking customers prefer to make purchases in their native languages. Its status as the official language encompasses 38 territories.
Russia isn’t far in affluence level from other rich countries but unlike their counterparts in wealthy countries, they aren’t very fluent in English. Hence, if anyone looking to do business with a Russian or someone from Russian-speaking countries, the knowledge of the Russian language becomes essential and hence, offering Russian call center services is important.

Portuguese
Portuguese, spoken by 250 million people worldwide is the official language of Brazil, the ninth-largest economy in the world. Portuguese may not be as popular as Spanish, but according to the CSA, it’ll soon move ahead of Italian, as the ninth most important language with almost 5% of the internet audience. At LiveSalesman, we offer Portuguese call center services, delivered by natives from Brazil and Portugal.

Korean
Korean is spoken by 80 million speakers worldwide. It is the sixteenth most popular language of the world and the official language of North as well as South Korea. The rise of the Korean language and Korean call center services is directly proportional to the rise of Korea as a leading economic power.

Dutch
There are 25 million people who speak this language in Belgium, the Caribbean islands of Aruba, Suriname, and Sint Maarten. It is also one of the official languages of the European Union and constitutes 5% of its population. It is also easier to learn for those who speak English. The Dutch language shares thousands of cognate words in English and German. Since there aren’t too many Dutch speakers, offering Dutch call center services in-house is not easy and hence, outsourcing to Multilingual call center companies makes more sense.