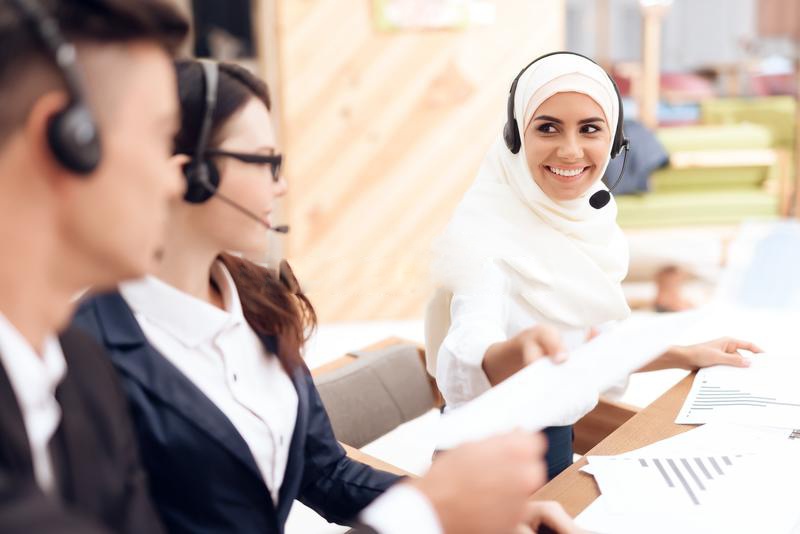 Arab as a whole is a traditional and religious place where religion positively touches every aspect of personal and business life. An Arab holds certain values and traditions close to heart, and this is true in all countries of the Arab world from the Gulf region to North Africa, together known as the MENA region. Anyone dealing with the customer of an Arab country has to keep the cultural aspects of the region in mind otherwise conversation can leave a negative impact on the Arab customer.

The unique aspect of Arab life is that all countries are closely linked with the common thread of the same language with little variations from one country to another.  The common Arab language is the language of the Qur’an, the holy book of Islam. And it is considered a holy language.  Any Arabic call center agent dealing with a customer from any country of the Arab region has to adhere to some norms and practices.

Since businesses with a global footprint often have to deal with customers from the MENA region, it is always advisable to take the service of the professional Arab call center agents to initiate a business deal. No business can neglect the Arab region and some of its 22 countries, as this region has some of the most affluent and highly competitive economies in the world.

It is instructive to understand that every Arab is a highly religious person and evokes the name of all mighty before the start of any work or even conversations. And an Arab feels obliged to listen to the Arabic call center agent who shows reverence to his religion. It is vital to keep a unique cultural aspect in mind while dealing with any customer from the region for a potential business deal.

Know the expressiveness of the Arabic language

An Arab man loves to talk as it is the legacy of the rich tradition of travelers greeting and exchanging information. They also love poetry and creative speech, which is evident in their bestowing flowery blessings. They believe that words have powers, and as a result, shun unpleasantly talks as, according to them, negative talk force negative results. The first meeting is often spent on greetings and salutations. Thus, any Arabic call center agent dealing with the Arab customer has to have a rich vocabulary of close to 10,000 words to cover the wide spectrum of emotions and feelings.

Use of colorful proverbs

Unlike the western world, time is not money in the Arab world. Any Arabic call center agent showing urgency or being impatience will bring instant loss of respect and consequent damage to the potential deal. The Arabic use of tenses reflects this approach to life, as there is no strict future tense, only present, and past. Some of the complicated ideas, we discuss all the time, with words such as ‘would’, ‘should’, ‘could’ and ‘might’ are deemed unnecessary.

Arabs are not fluent in English, and even affluent one does not like to use the language. So, the use of the Arabic language is first to step to engage the customer. It also instills a sense of security and assurance to the customer. Hence, even businesses targeting high-end Arabic customers cannot be content with providing just English support. It is a good idea to use bilingual Arabic call center agents who are fluent in both Arabic and English and can switch the language based on the preference of the customer.

Use pious words mention HIM and HIS mercy and benevolence

An Arab citizen is the most religious person in the world. They believe that, though, not all, but still a lot of things are controlled by GOD, not human beings. An Arabic call center agent should never ignore the positive role of Islam in every aspect of the life of the Arab citizen. When you use GOD‘s name in greeting and conversation, an Arabic customer feels more obliged to listen to you and conclude a deal.

Showing respect to Islam is the first step to win the trust of the Arabic customer. They tend to do dealing with a person who sincerely shows reverence to Islam, something that you need to constantly harp upon in your Arabic call center. It creates the mutual trust that is the fundamental block in establishing a business relationship.

Dignity, proud and honor are virtues which Arab people cherish. Make them feel that they have got a better deal after some bargaining, take it as part of the customer care. Allow an Arabic customer to walk with pride after closing the deal in his favor. This helps you in the long run, as you have just converted a customer into a loyal customer.

Dialectical variations of the spoken language.

Our native speakers of the Arabic call center match the average Arab speakers’ rich, thus effectively expressing all nuances of the language. We offer bilingual Arabic call center support for some of the world’s most renowned brands. Talk to us today to find out more.